As a leading player in the field of mesh routers, Eero had to launch a Wi-Fi 6E solution. This latest generation technology promises high speeds and reduced interference thanks to the 6 GHz band. However, this innovation comes at a high price, primarily because it can only be used with compatible devices. Let’s see what the Eero Pro 6E offers in everyday use and whether the extra cost is justified.

Since Amazon bought Eero, the brand has gained popularity and has crossed the Atlantic to arrive in the UK, to the delight of mainstream users. Their philosophy is to offer a simple experience, allowing them to be installed in a few minutes and benefit from a stable and fast connection without requiring technical knowledge. Amazon, therefore, had to launch a 6E Wi-Fi router to secure a share of this fast-growing market.

The Eero range is quite extensive. There is the basic model, which we tested in 2020, and the Pro version, which has tri-band connectivity. The brand has since innovated by incorporating the latest Wi-Fi advances, launching the 6, 6+, Pro 6 and Pro 6E models. Although it may be hard to tell, the Pro 6E is the most advanced of the six models, thanks partly to 6E Wi-Fi and triband connectivity, which allows for theoretical Wi-Fi speeds of up to 1.3 Gbps.

The design of the Pro 6E is quite classic, although it is pretty imposing. It measures 142 x 138 x 51 mm, which takes up a lot of space on a desk or cabinet. However, it remains discreet as it is not high, allowing it to go unnoticed. Eero has slightly curved the top of the Pro 6E, encouraging you not to put anything on it to block the antennas and giving it a less square look.

Connectivity is located on the back of the product, with a USB-C power port and two Ethernet ports. The former is capable of speeds up to 2.5Gb/s, while the other is content to offer standard gigabit connectivity. While more would have been better, it’s challenging to achieve speeds above 2Gb/s over fibre these days, especially as this will be shared with the rest of the connected devices.

As usual, Eero does not distinguish between the main access point and the satellites. The modules are, therefore, strictly identical and interchangeable, as they can automatically detect whether the device connected to Ethernet is a modem. This approach allows for two ports per satellite, which is particularly useful for connecting devices that do not have Wi-Fi connectivity. This is the case, for example, with specific home automation boxes, which are best placed as close as possible to the products to be controlled. Finally, it is also possible to connect a satellite directly to the main router, which can be helpful in the case of large houses that already have pre-installed Ethernet cables.

Finally, it’s worth noting that despite being Alexa-enabled Amazon products, Eero routers don’t act as connected speakers. It’s a shame, especially as it would have avoided the need for multiple devices.

As Eero’s most advanced and expensive product, the Pro 6E has six Wi-Fi antennas and Bluetooth connectivity for easy set-up. It can also act as a home automation hub, thanks to its dual Zigbee and Thread connectivity, making it compatible with the Matter protocol. To make it all work, it is equipped with a dual-core 1GHz processor, 1GB of RAM, and 4GB of internal memory. Note that the latter is dedicated to the router’s system and cannot be used as shared storage space.

The Eero Pro 6E can be purchased as a single unit or as a set of two or three routers. Each unit covers up to 190 m². A mesh network with two units extends this to 380 m², a third to 560 m², and so on. Of course, additional satellites can be added later. It is also important to note that Eero products are compatible with each other. This means that you can use a Pro 6E router on the ground floor and share a 6E Wi-Fi connection with nearby devices, but use cheaper Eero 6s upstairs if you don’t need a 6E Wi-Fi connection in the rooms.

As mentioned earlier, the Eero Pro 6Es theoretically achieve Wi-Fi speeds of 1.3 Gbps. In use, these figures can vary greatly, and speeds are often lower, especially as they require Wi-Fi 6E-enabled devices to operate. Initially, we found the Pro 6E’s speeds to be unremarkable, not least because, despite the use of compatible devices, these did not connect to the 6GHz band, making the purchase of a 6E router unnecessary. Fortunately, several updates were rolled out during our trial that improved things. Indeed, during the last few days of our trial, we were able to measure a Wi-Fi speed of almost 920 Mb/s with a 1 Gb/s fibre connection, which is the full speed sent by the internet box.

These speeds are impressive but are not representative of the actual throughput of the Eero Pro 6E. Although we were able to measure speeds of over 900 Mb/s on several occasions consistently, these speeds are only achieved if you are in the same room as the router. Thus, one floor below, when placed exactly vertically to the router, the speed drops to 490 Mb/s, even though the connection is relayed by the satellite, itself placed on the floor below, literally below the router. Finally, on the opposite side of the house, speeds only reach 180 Mb/s while being about 20 metres from the nearest router. While these figures may seem disappointing, they are similar to those we measured in our Nest Wi-Fi Pro test. This is because, despite having triband connectivity, Eero has not dedicated any bandwidth for communication between routers, which reduces the available throughput, just like Google.
Buying just one Eero Pro 6E router may be worthwhile to take advantage of the 6GHz connection in the room where it is located and possibly use cheaper satellites for other rooms, such as an Eero 6.

Alternatively, it is also possible to connect them by wire and thus benefit from a stable 6E Wi-Fi connection throughout the house. However, it will not be possible without a power cable, as the Eero Pro 6E does not support PoE.

As Eero aims to make everyday use as simple as possible, the application is relatively featureless. It is still possible to check the connection speed and the details of the connected devices, knowing which access point it is connected to. The application also records the activity of each device, i.e. the amount of data downloaded and sent. Unfortunately, you’ll have to pay a premium to see the statistics over a more extended period, which is a shame considering the router’s price.

The settings could be more adjustable, as it is possible to adjust the brightness of each router’s LED, create guest Wi-Fi access, enable or disable IPv6 and UPnP, and adapt some DHCP and DNS settings. That’s about it, although the Eero Labs menu does offer to help WPA3 security and optimise throughput for video conferencing and gaming in beta.

The Eero Plus subscription allows you to take advantage of some “advanced” features, such as blocking specific sites, applications and advertisements, accessing the activity history of each device, and taking advantage of services like DDNS, 1Password, Encrypt.me and Malwarebytes. Given the meagre benefits of the Eero Plus subscription, its monthly price needs to be revised, especially as the router is not cheap. 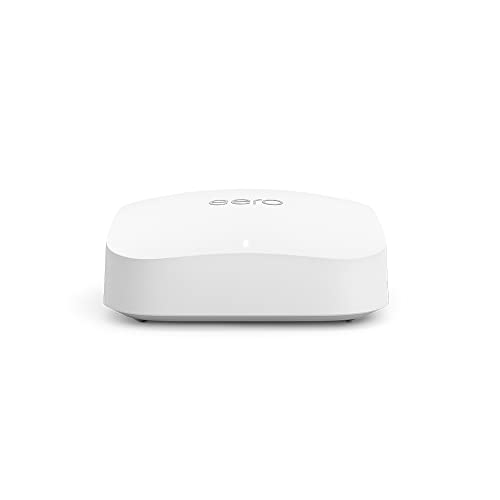