After the Basilisk, the Naga also gets an upgrade that brings the new 30K Focus Pro sensor, revised switches and an ultra-customisable wheel never seen before at Razer. Here is our review of the Razer Naga V2 Pro.

The Razer Naga V2 Pro has the same shape as its predecessor and still benefits from the removable side panel system. This mouse, primarily intended for MOBA and MMORPG players, is also suitable for office use.

The second version of the Naga Pro features a new optical sensor and switches to improve its overall performance. A brand new, fully customisable scroll wheel also makes its appearance and compatibility with the Mouse Dock Pro that we discovered with the Basilisk V3 Pro.

Razer still needs to change the recipe of the Naga with this V2 Pro. And for a good reason, this new model is identical to the iteration released last year. It has the same ergonomic shape, materials, and interchangeable shells.

The grip is as convincing as ever, although it still takes some getting used to for users who are used to more traditional mice. The Naga V2 Pro’s shape and relatively short rear shell make it ideal for a palm grip. Like last year, the front part of the hand will be resting on the mouse.

Not necessarily the most suitable for shooting games, the Naga nevertheless offers remarkable comfort and a grip that makes it ideal for many uses. It will satisfy gamers and users looking for a mouse that can be customised for exceptionally creative, and office uses.

After a few minutes of use, you can quickly notice a first change compared to the V1, especially in the buttons. The brand has equipped the mouse with new switches that are sharper and overall more comfortable to use. However, the increased noise generated by the two main clicks is the downside.

Razer has kept the non-slip coating on the edges, making the mouse easier to grip. As with the Naga range, the interchangeable side shells are still there, with 12, 6 or 2 buttons. This allows the Naga to adapt to any situation. The shells are replaced in a few seconds thanks to a well-thought-out magnetic system.

Visually, the wheel has yet to evolve, except that it has lost its RGB lighting. Only the brand logo on the upper part of the shell has remained. However, this new wheel hides its game well, as it is one of the main novelties of the Naga V2 Pro.

Another important novelty is the compatibility with the Mouse Dock Pro that we discovered during the test of the Basilisk V3 Pro. This dock, which is once again not included, makes the mouse compatible with wireless charging while allowing 4,000 Hz wireless operation.

Underneath the mouse is the slot for the charging roller, the profile change button and the switch for switching between the different connection modes. If the user has yet to invest in the brand’s docking station, it is, of course, still possible to charge the Naga V2 Pro using the USB-C port and the braided cable supplied.

Finally, it should be noted that this V2 Pro has gained about fifteen grams compared to the previous generation, which was already not known for its lightness. This is a point that should be considered when buying a mouse, as ultralight mice have been in fashion for several years.

One of the main new features of the Naga V2 Pro is the new customisable wheel. We’ve already seen wheels that can be switched off automatically, but this is an entirely different matter. In concrete terms, it is possible to customise the resistance of the wheel and the number of notches it has.

For example, it is possible to set up a few sharp notches in a shooting game to make switching between the different weapons more efficient. Similarly, for office use, the idea may be to reduce the resistance and increase the number of detents to get closer to the operation of a fluid wheel like the Logitech MX mouse.

Several presets are offered within Synapse, but it is also possible to create a custom setting to adapt the operation of the wheel to our preferences. This wheel does not necessarily revolutionise the use of the mouse, but it does provide something new that can make sense in certain situations.

For the rest, Synapse lets us customise the mouse’s multiple buttons in detail to suit our games and applications. The app also automatically detects the number of buttons on the installed side panel. The possibilities offered by the Naga V2 Pro are endless, and it will be particularly suitable for creative people who need many shortcuts.

The connection with our computer is ensured by the 2.4 GHz dongle supplied in the box or the Mouse Dock Pro. As with the previous generation, it is also possible to use the Naga V2 Pro in Bluetooth with multiple devices. In addition to extending its compatibility, this Bluetooth operation allows for battery relief when performance is not essential.

Razer has announced a battery life of almost 300 hours when the Naga is used in Bluetooth. This battery life is logically divided into two if the classic radio link is used. It is challenging to measure this battery life with precision. However, we could use the mouse daily for a fortnight without having to recharge it once. Finally, note that it is still possible to use the Naga V2 Pro with the USB cable in the box.

During our few days of use, we did not notice any malfunction of the radio link, which proved reliable and efficient. No latency was noticeable, and it is impossible to distinguish it from a standard wired connection.

Razer had the excellent idea to equip the Naga V2 Pro with the same optical sensor as its latest flagship models. With a sensitivity of 30,000 DPI, a definition of 750 IPS and the ability to withstand accelerations of up to 70 G, it is still one of the best sensors of the moment.

In use, there is simply nothing to complain about. The mouse responds perfectly in all situations, whether on very demanding titles or in precision uses such as creative tools. We could test the Naga V2 Pro both on shooting games and when editing photos in Lightroom without having anything to complain about.

In summary, and beyond its different format, the Razer Naga V2 Pro offers identical performance to its cousins, the Basilisk V3 Pro or DeathAdder V3 Pro. Like the latter, it is positioned as an accurate reference on the gaming mouse market. 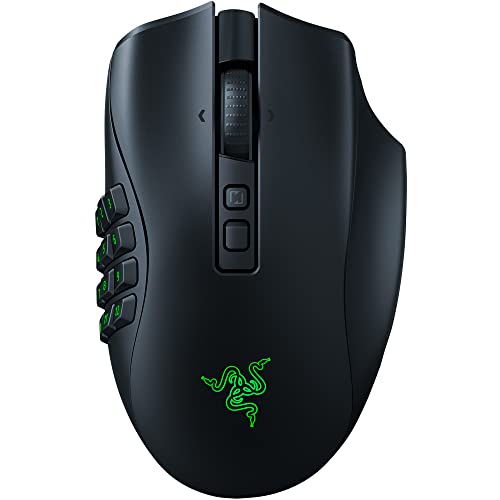